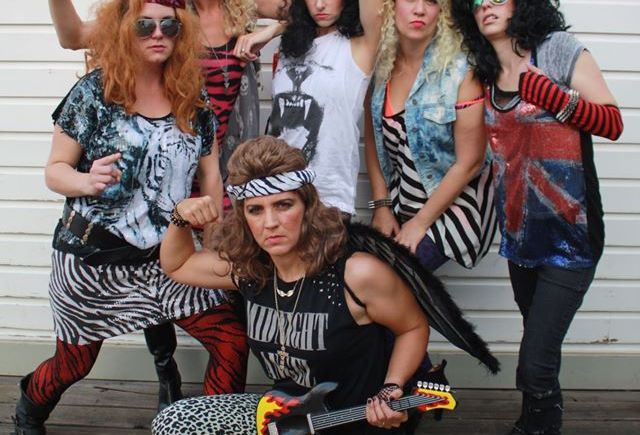 Midnight Angel always looked up to her Twisted Sistah, but after a run-in with the law, she left town in a Blaze of Glory. She was not only a Runaway, but she was also Wanted Dead or Alive. Despite being the runt of the litter, Midnight was no Rag Doll and no Fallen Angel. She made a name for herself on the streets of Paradise City, where she was Livin’ on a Prayer…until she realized she had What It Takes to arm wrestle like Nobody’s Fool.

Then, came the news which Shot Through the Heart: the hairspray factory in her hometown was in trouble. An electrical short left most of the building Burning Like a Flame. Midnight hitched a ride on the Nightrain and came Home Sweet Home. Reunited with Twisted Sistah and with the help of the Iron Maidens, Midnight Angel set out to save the factory, escape her troubled past and rescue her hometown. But how?

Midnight went to Turn Up The Radio and realized what she had known all along: I Wanna Rock and I wanna wrestle. So, she dusted off her guitar, rounded up the Iron Maidens and got ready for the show of her life. Will Midnight and her motley crue Rock You Like a Hurricane? Will she have What It Takes to win the belt?